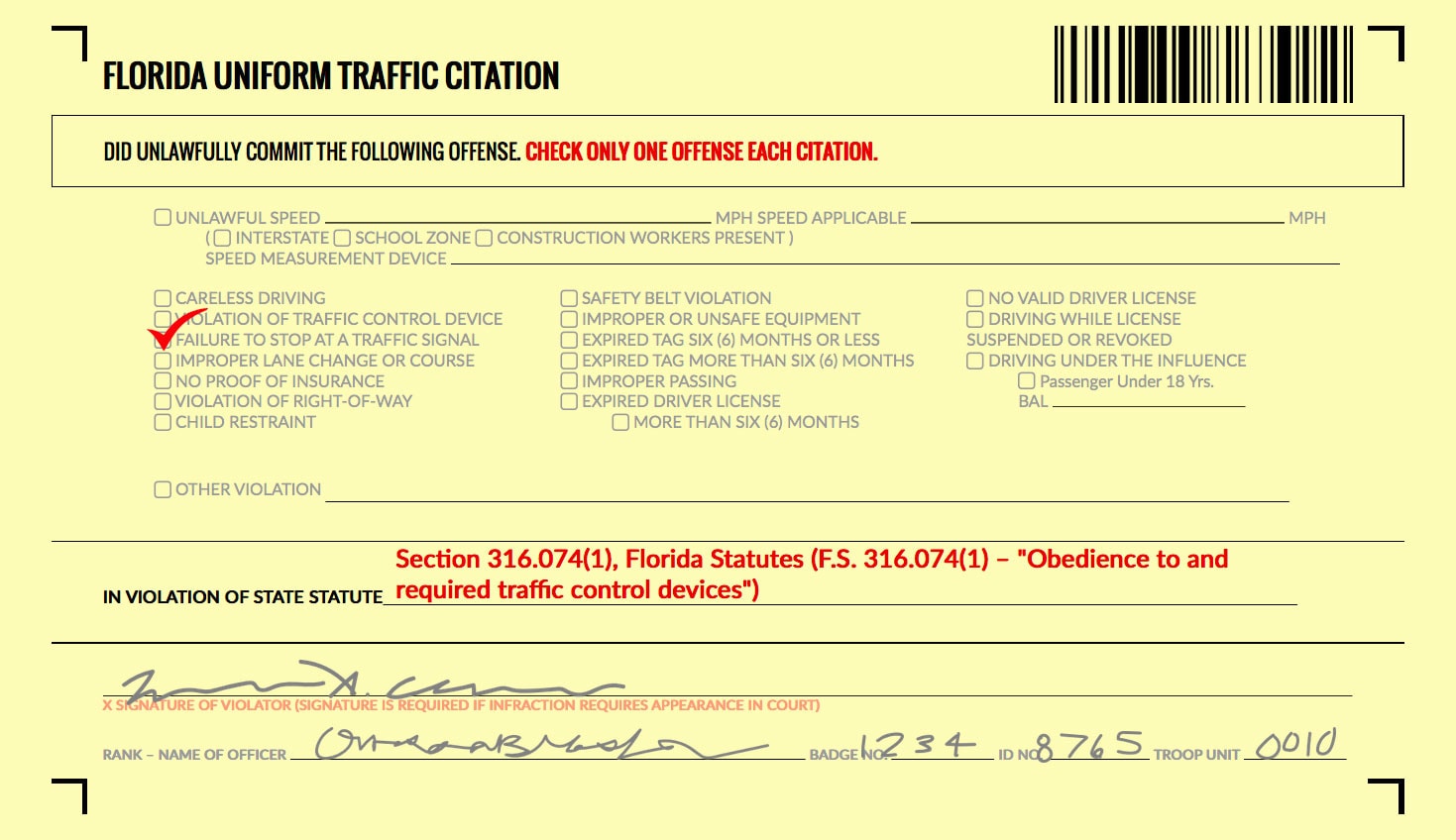 Red Light Tickets Can Be Costly

Florida Ticket Firm‘s traffic ticket attorneys in Florida and adjacent areas help people who find themselves stopped by police for having failed to stop at a red light. Traffic signals are intended to guide traffic and help protect everyone on Florida’s streets and roads. Most Florida drivers are conscientious about obeying traffic lights – using caution where there is a yellow light and stopping where there is a red light.

Of course, every once in a while, you find yourself distracted, not paying attention, and you realize you have just run a red light. Fortunately, many times there was no police officer or deputy sheriff nearby to see you going through that red light signal; more, fortunately, there were no other vehicles crossing the intersection. However, every so often, a police officer or deputy sheriff witnesses a driver apparently running a red light (whether intentionally running the red light or not), pulls the driver over and issues a Florida Uniform Traffic Citation for failure to stop at a traffic signal. Some other very unfortunate times, a car accident occurs because someone failed to stop at a red traffic signal, and a red light ticket is issued by a police officer or other law enforcement officer (LEO) who did not witness the car crash or the events leading up to the automobile accident. Other times, red light traffic tickets are issued through the mail and received as a result of a red light camera taking photographs or streaming video of you going through a red traffic light.

The knowledge and experience of a Florida red light traffic ticket lawyer can be invaluable when attempting to defend against a traffic ticket for failing to stop at a stoplight.

Our South Florida traffic ticket attorneys together have handled well over a million traffic tickets and know the Florida Rules of Traffic Court, the Florida traffic laws and the technical deficiencies that many times appear in a Florida traffic citation for running a red light. The knowledge and experience of a Florida red light traffic ticket lawyer can be invaluable when attempting to defend against a traffic ticket for failing to stop at a stoplight. There is no reason to take time off of work and use valuable vacation days or paid time off (PTO) to go into traffic court and spend your scarce time when Florida Ticket Firm’s red light ticket attorneys can alleviate that burden and stress. Sitting in an unfamiliar courtroom, in front of an unfamiliar judge, dealing with an unfamiliar legal process is not fun for everyone; it’s actually not fun for most. The traffic lawyers who handle tickets for Florida Ticket Firm increase the probability of a successful outcome for your case, just based on experience alone.

If you have received a Florida traffic ticket for running a red light in any of the Florida counties – contact Florida Ticket Firm toll-free at 844-352-3476 for a FREE CONSULTATION with one of our attorneys, who have years and years of collective experience defending red light tickets. Se habla español.